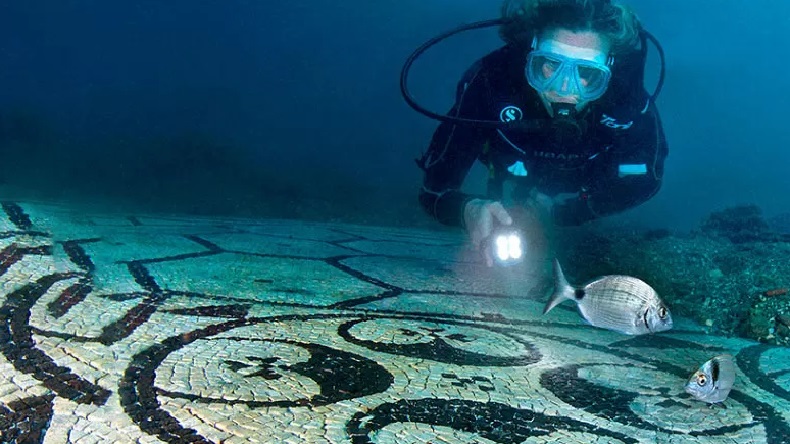 Rome is a city that never ceases to amaze. And scientific discoveries will keep that splendour strong, as the city of Baia continues to shine, even from under water. Watch the video and then do the accompanying English language exercises.

Baia: A City That Lies Beneath the Waves | Definition Match

Baia: A City That Lies Beneath the Waves | Fill in the Blank

Baia: A City That Lies Beneath the Waves | True or False

“In its heyday, the classical Roman city of Baia was the hedonist Las Vegas of the time, but now its remains are partying beneath the waves. A prominent resort city for centuries, Baia catered to the recreational whims of the rich and powerful among the Roman elite. The city, which was located over natural volcanic vents, was famous for its healing medicinal hot springs which occurred all around the city and were quite easy to build spas over. Some of antiquity’s most powerful figures such as Nero, Cicero, and Caesar were known to have visited the city and a number of them actually built permanent vacation villas there. Unfortunately, the good times were not to last and the city was sacked by a Muslim army in the 8th century. By 1500, the remains of the formerly luxurious town were abandoned. After the city remains were emptied, the water level slowly rose due to the same volcanic vents that were once a draw to the area, and most of the ancient ruins were drowned under the shallow waters of the bay. Today the ancient remains of Baia can be visited in one of the world’s few underwater archaeological parks. Visitors can view the crumbled structures and amazingly preserved statuary of the city through glass-bottomed boats, snorkelling, or even scuba dives which allow people to actually swim amongst the copious ruins. While the city is no longer a resort, its waters still hold wonders.”